Ferdinando de’ Medici, Grand Prince of Tuscany (1663-1713) was the first son of Cosimo III de’ Medici. He was the last great personality of the Medici family and inherited the taste and spirit of his great-uncle Cardinal Leopoldo de’ Medici.

His enlightened patronage made Florence once again an artistic centre and encouraged the development of the lighter, more vivid and painterly style of the 18th century. Ferdinando’s only journeys outside Tuscany were in 1688 and 1696 to Venice, where he developed a lasting enthusiasm for Venetian painting.

In Florence, and in his country villas, he indulged his passion for collecting paintings and antique furnishings and for the patronage of contemporary artists and musicians. The theatre at his villa at Pratolino, where the sets were designed by Francesco and Ferdinando Galli-Bibiena, was celebrated, and here he entertained scholars, painters and musicians, among them Alessandro Scarlatti.

Ferdinando enriched his picture collection by removing works from the churches and convents, which were compensated by copies or economic benefits. Outstanding works acquired in this way between 1690 and 1704 included Fra Bartolommeo’s St Mark, Andrea del Sarto’s Madonna of the Harpies, Lodovico Cigoli’s Deposition, Parmigianino’s Madonna of the Long Neck and Carlo Maratti’s Virgin with St Philip Neri. These works were displayed in his apartment in the Palazzo Pitti, Florence, in a symmetrical pattern devised by Giacinto Maria Marmi, which involved enlarging and cutting down some of the pictures and creating special frames. Self-portraits by Giovanni Lanfranco, Mattia Preti,Sebastiano Ricci and Rosalba Carriera were among his additions to the self-portrait collection in the Uffizi.

In the villa at Poggio a Caiano Ferdinando assembled some 174 small pictures, densely patterned on the walls, in a small room (6×6 m): his ‘gabinetto d’opere in piccolo’. This collection, now dispersed, for which he was indebted to the generosity of his brother-in-law, the Elector Palatine John William and the advice of Niccolo Cassana, included works of various schools (mainly Flemish, Dutch, Venetian and Bolognese) and periods; among them were Raphael’s La muta (Urbino, Pal. Ducale), Dürer’s Virgin with the Pear (Florence, Uffizi) and Titian’s Knight of Malta (Madrid, Prado). His letters to Cassana and Sebastiano Ricci (Fogolari, 1937), who bought paintings for him in Venice, give a lively picture of his taste and learning. He discussed 16th-century Venetian paintings with Cassana, and his collection included many works attributed to Titian; his letters to Ricci, mostly from 1704 to 1708, discuss possible purchases and contain penetrating observations on the work of Giovanni Battista Moroni, Tintoretto, Johann Liss, Livio Mehus, Simon Vouet and other artists.

Ferdinando’s patronage of contemporary artists revealed an increasing preference for freedom of handling and sumptuous colour. He nevertheless remained loyal to Anton Domenico Gabbiani, who, at Pratolino, painted five canvases of Musicians (1685–7; Florence, Pitti); these show instruments made for the Prince that now belong to the Florence Conservatory.

Gabbiani, encouraged by Ferdinando, visited Venice in 1699 to improve his handling of colour.

The year before he had frescoed the Apotheosis of Cosimo il vecchio for the Prince at the villa Poggio a Caiano.

Antonio Ferri and Giovanni Battista Foggini sculpturally enriched the 16th-century fountains at Pratolino, while Crescenzio Onofri, who had arrived at the Tuscan court in 1689, collaborated with Antonio Giusti, Francesco Petrucci (1660–1719) and Pietro Dandini on the decoration of the villa with landscape frescoes and a series of vast canvases.

Cassana painted copies, portraits and history paintings for Ferdinando, among them the spirited Portrait of a Cook.

The Prince’s love of Venetian art is suggested by his purchase of pictures by Johann Carl Loth, whom he had met in Venice in 1688, including the Flaying of Marsyas (Florence, Pitti), and a number of Venetianizing works by Mehus. Alessandro Magnasco collaborated with Antonio Francesco Peruzzini on works for the Tuscan court in 1703, Magnasco painting a Hunting Scene in which he portrayed himself, Sebastiano Ricci and Ferdinando. Ferdinando’s greatest success, however, was his patronage of Sebastiano Ricci and Giuseppe Maria Crespi. Ricci decorated his small gallery at Poggio a Caiano with an Allegory of the Arts; his ceiling painting in the Palazzo Pitti, Venus and Adonis (photo bellow), is one of the most elegant Rococo decorations in Tuscany. 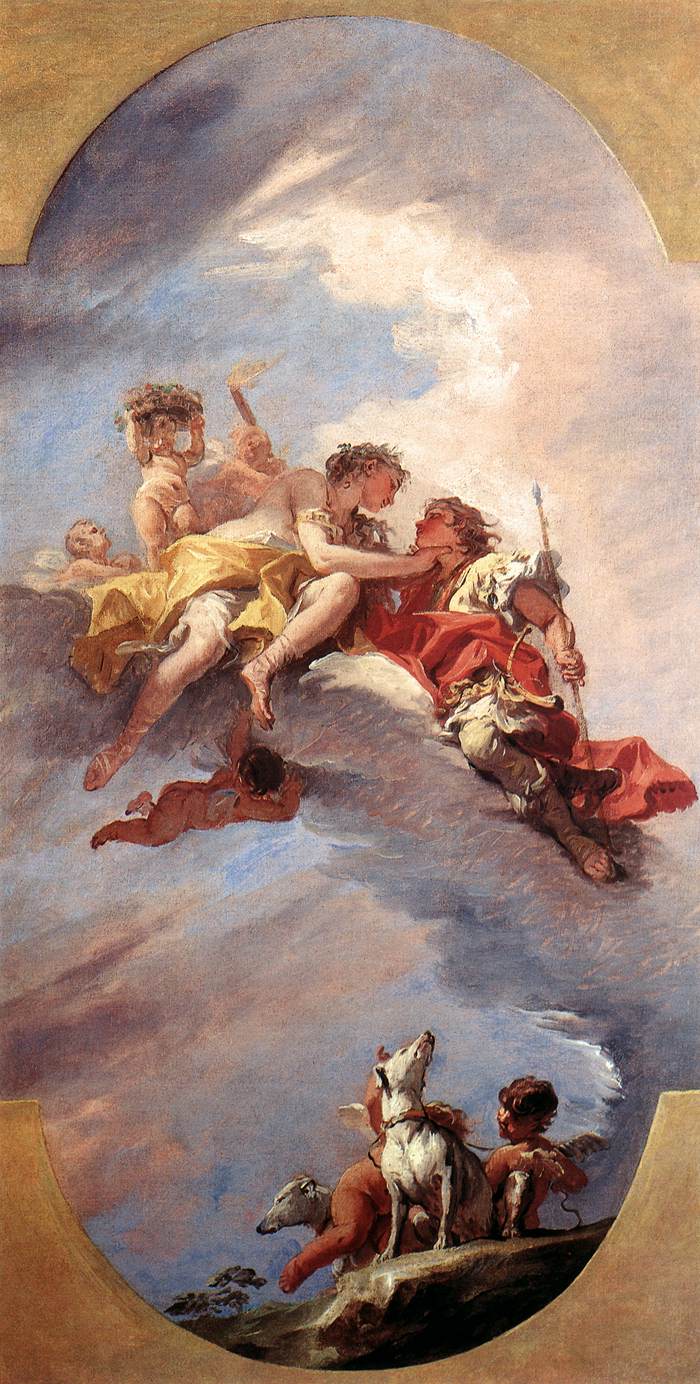 Crespi arrived at Pratolino in 1708, bearing as a gift his Massacre of the Innocents; during this visit he painted two compositions entitled Still Life with Fish and Birds. Ferdinando admired his intimate and lively art, and Crespi sent further works from Bologna, returning by invitation to stay at Pratolino for eight months in 1709, on which visit he painted the Fair at Poggio a Caiano.

Ferdinando planned to have a large part of his collection engraved, under the direction of Foggini, and about 150 engravings were completed. Francesco Petrucci and Carlo Sacconi made most of the drawings; the engravers were Giovanni Antonio Lorenzini, Cosimo Mogalli, Giovanni Domenico Picchianti and Theodor Verkruys. The inventory of Ferdinando’s estate includes more than a thousand paintings and drawings, sculptures, decorative objects and furnishings. Ferdinando’s marriage was without issue, and the succession passed to his brother Gian Gastone de’ Medici.