He was the greatest private patron of his time, who, motivated through ambition for his family, and perhaps through a desire to compensate the sin of lending, introduced a new conception of patronage; a humanist one.

He fully appreciated the propaganda value of architecture and sculpture, and his ambitions rivaled those of the Comune.

Primarily an architectural patron, Cosimo favoured Michelozzo di Bartolomeo, but he also gave generous support to Donatello and others. 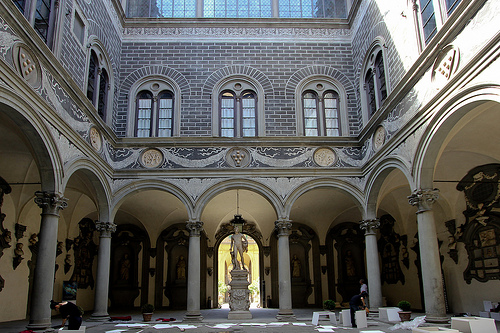 Cosimo increased his father’s trading and banking business and became one of the wealthiest men of his time. He dominated Florence from 1434; yet he himself valued his citizen status and constantly emphasized it, and the artistic tradition associated with him is simple and restrained. He was prior of his guild in 1415 and 1417, accompanied the antipope John XXIII to the Council of Constance and then travelled in Germany and France. He was Florentine ambassador to Milan (1420), Lucca (1423), Bologna (1424) and the court of Pope Martin V in Rome. His long association with Michelozzo began in this period: in the 1420s Michelozzo remodelled Cosimo’s austere villa at Trebbio and the monastery of San Francesco at Bosco ai Frati, both of which were situated in his patron’s native region of the Mugello.

Cosimo had mastered the French and German languages on his travels in Europe and had been introduced to Latin and Arabic in the monastery of Camáldoli, and an inventory of his library made in 1418 indicates that from early on he owned an extensive collection of contemporary and Classical literature.

In 1433 Cosimo’s support of the people led to his banishment by the dominant Albizzi family, but in Padua and Venice he was received like an honored visitor rather than a fugitive, and his business interests flourished. He was accompanied by Michelozzo, whom he commissioned to design the library of the Benedictine monastery of San Giorgio in gratitude for the Venetian hospitality. He then endowed the library with precious manuscripts.

In 1434 he was recalled from exile and became the unofficial ruler of Florence until his death. The republican form of government was maintained, but Pius II commented that Cosimo lacked only the title and pomp of royalty. One of Cosimo’s great achievements for his native city was the transfer of the Council of Ferrara, a meeting of the Eastern and Western churches, to Florence in February 1439; many contemporary Florentine paintings were enriched by the portrayal of exotic Eastern figures, lavishly clad in gold-embroidered silk garments and elaborate headgear. The Council was attended by such scholars as Gemistos Pletho, who stimulated a profound interest in Platonic philosophy. Cosimo later founded the Platonic Academy, which, under the guidance of Marsilio Ficino became the centre of humanist thought.

Much of Cosimo’s patronage was for churches and monasteries, and in 1436 he initiated the rebuilding of the Dominican monastery of San Marco, whose sole patron he remained until his death. He awarded the commission to Michelozzo.

The interior was decorated by Fra Angelico, who executed the high altar, known as the San Marco Altarpiece, which unites Dominican and Medicean themes, and directed the frescoed decoration of the interior, where two double cells were reserved for Cosimo’s private use.

For the library, the monastery’s most innovative feature, Cosimo had 200 books copied from other collections within two years, according to Vespasiano da Bisticci, his contemporary biographer;

He also assembled precious manuscripts from all parts of the world and, in repayment of a loan, acquired the collection of the humanist Niccolò Niccoli, which he donated to the library on the condition that it was made accessible to the public.

Cosimo also supported the continuation of Brunelleschi’s work on the Old Sacristy of San Lorenzo, where he initially acted as joint patron with his brother, Lorenzo de’ Medici, and for which Donatello produced the twin pairs of bronze doors, the lunettes above them and eight roundels on the walls and pendentives showing the Four Evangelists and scenes from the Life of St John the Evangelist. From 1442 Cosimo was the dominant patron of the church, and from this year, apart from the family chapels, the building was financed by Cosimo alone. Donatello’s two pulpits, decorated with bronze panels, date from the 1460s. Cosimo also initiated the building of a dormitory for the novices of Santa Croce and was involved in the alterations to the church of SS Annunziata.

Cosimo’s largest building project of the 1440s, however, was the new Palazzo Medici in the Via Larga, Florence. Tradition relates that the first plans were by Brunelleschi, but Cosimo rejected these as too monumental and presumptuous. Nonetheless, the subsequent design by Michelozzo in 1444 produced a palazzo of unprecedented grandeur and became the model for many subsequent town palaces.

Cosimo commissioned Donatello to make two large-scale bronzes statues for this palazzo: Judith Slaying Holofernes and David. He was probably responsible for the commission to Paolo Uccello for a series of decorative paintings of the Rout of San Romano. In this period Cosimo also had the country villa at Careggi remodelled by Michelozzo, and here, influenced by the classical ideal of villa life, he sought spiritual refreshment in the beauty of the countryside.

Vespasiano emphasized that Cosimo ‘had a good knowledge of architecture … and all those who were about to build came to him for advice’. Thus it seems likely that he played a significant role in the planning of his palazzo and probably an even larger part in designing the Badia of Fiesole. The ample documentation on the latter never mentions the name of an architect, but only that of Cosimo, who inspected the work daily. He is said to have spent 70,000 gold florins on the architecture of this monastery and a further 14,000 florins on the embellishment of its interior; he endowed the library with precious manuscripts. Yet, despite the scale of his involvement, he regretted having started his activity as patron so late in life.

Cosimo was also involved in commissions to Desiderio da Settignano, Andrea del Castagno and Fra Filippo Lippi. A number of other cities benefited from Cosimo’s interest in art. In Milan he had the courtyard of the Medici bank, a palazzo previously owned by the Sforza family, extended by Michelozzo and commissioned frescoes from Vincenzo Foppa.

In Paris he restored the Collegio degl’Italiani and in Jerusalem he built a hostel for pilgrims. He died on his country estate at Careggi and was carried in state to San Lorenzo and buried in the crypt there. A porphyry ledger by Andrea del Verrocchio before the altar bears the inscription posthumously awarded to him by the Signoria of Florence on 20 March 1465: ‘Pater Patriae’. His role as patron was later celebrated in the frescoes designed by Giorgio Vasari in the Sala di Cosimo il Vecchio in the Palazzo Vecchio.