Catherine de’ Medici (1519-1589) was the wife of Henry II and the daughter of Lorenzo de’ Medici, Duke of Urbino, and Madeleine de La Tour d’Auvergne.

Without influence during the reign of her husband, she ruled France from his death in 1559 until the first years of her son Henry III’s reign, continuing to spend lavishly on her properties and collections in emulation of her father-in-law Francis I, whom she greatly admired. In 1547 she acquired the château of Montceaux-en-Brie (Seine-et-Marne), and in 1560 she compelled her husband’s mistress Diane de Poitiers to surrender the château of Chenonceau to her.

In 1563 she acquired the château of Saint-Maur-Les-Fossés, near Charenton, and began to assemble the lands at the gates of Paris that were to constitute her estate of the Tuileries. In 1570 she bought another property in Paris in the parish of St Eustache.

Her favoured architect was at first Philbert de L’Orme, who added a pavilion with a grotto to Montceaux in 1557. At the death of Henry II, however, she replaced de L’Orme with Francesco Primaticcio as head of the Bâtiments du Roi, and he built the Aile de la Belle Cheminée  at the château of Fontainebleau and designed the circular, domed Chapelle des Valois at Saint-Denis Abbey as a funerary chapel for the royal family.

She continued to employ de L’Orme, however: from 1563 he added pavilions at the unfinished Saint-Maur, and in 1564 she asked him to design her villa in the Tuileries. After his death in 1570 she turned to his former associate Jean Bullant, to continue work at the Tuileries, the Maison de St Eustache, and the Chapelle des Valois, and to complete her Paris town house near St Eustache (of which only the astonishing observatory in the form of a colossal Doric column survives). Bullant also enlarged Saint-Maur to a new design, altered the façade of Chenonceau, constructed the famous gallery supported on arches over the River Cher and designed an immense trapezoid forecourt that was not built. 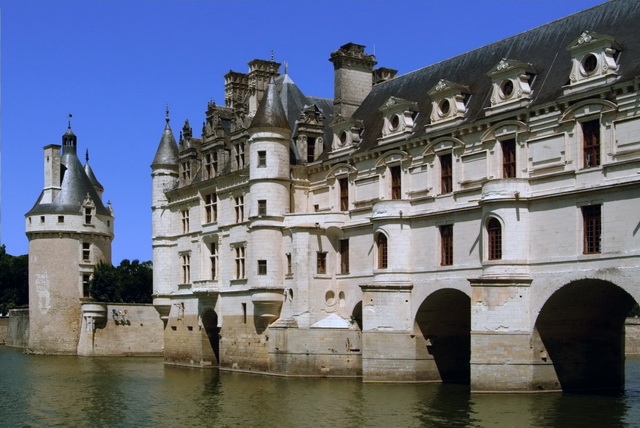 Catherine was probably also responsible for the construction at the Palais du Louvre, Paris, of the flat-roofed Basse Galerie, the forerunner of the Petite Galerie designed to connect the Louvre with the Tuileries.

Catherine’s major sculptural commissions were given to Germain Pilon, who executed for her the monument for the heart of Henry II for the church of the Celestines in Paris, the bronze figures for Henry’s tomb designed by Primaticcio at Saint-Denis, as well as the Risen Christ and the Virgin of Sorrows intended for the Chapelle des Valois.

She also had numerous pictures and had a particular liking for portraits, of which she owned 341. Her favored artists were the Italians employed at Fontainebleau, Nicolò dell’Abate and Rugiero de Ruggieri, as well as the French Dumonstier family and Antoine Caron.

The inventory drawn up after Catherine’s death reveals the extent of her collections, which included, among other objects, a library of 4500 volumes, 259 painted enamels, including 32 portraits set into the paneling of a room, 141 pieces of ceramics by Bernard Palissy, tapestries, antiquities and all kinds of precious objects.

Among surviving objects from her collection are a triptych of painted enamel representing her in her oratory, an emerald pendant by the goldsmith François Dujardin and the enamelled gold covers for her Book of Hours and a set of elaborately worked crystal vases.